Exhibition “To the New World! Estonian Architects in Toronto” 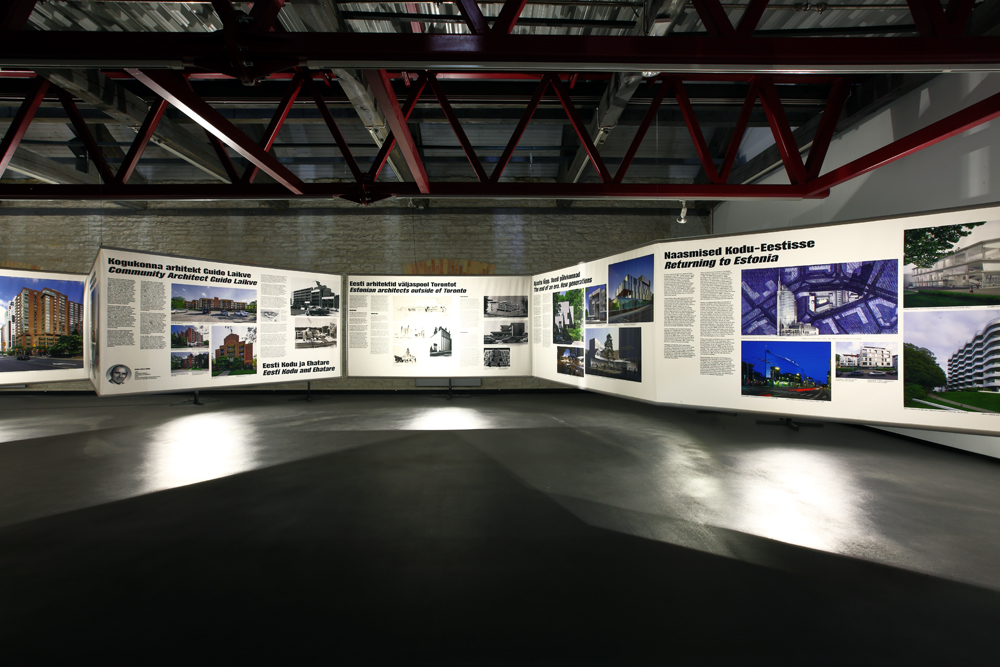 Installation of the exhibition
Bart

The exhibition of the Estonian-born architects in Canada was an important event not only for Estonians living in Toronto but also for people interested in the history of architecture in Toronto. It attracted considerably more non-Estonian audience to the venue at Tartu College where it was exhibited in connection with VEMU cultural programme, including visitors with highly specific interests. On the one hand, the local Estonians received new knowledge of their compatriots’ work in the field of architecture, while it also became a source of pride for the local community. We were particularly happy that the research conducted for the exhibition also came to be published as a book in two languages making the work of Estonian architects in Canada more accessible to the general public.
Piret Noorhani / Chief Archivist of the Museum of Estonians Abroad 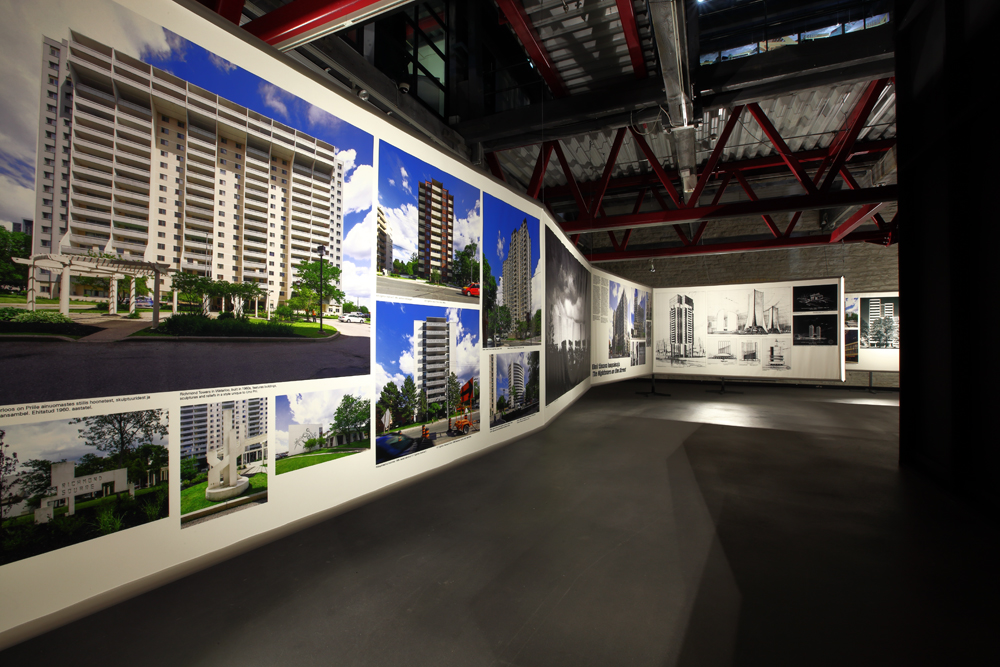 The white fabric can be seen as a symbolic reference to the fact that the Estonian refugees arrived in Canada from Sweden by sea. The billowing of the fabric also stressed an association with sailcloth. In the middle of the room was an installation from the last exhibition. After being painted jet-black, it became the centre-point of the exhibition as a cinema room; it was a slightly mysterious object, something akin to the famous monolith in 2001: A Space Odyssey. From inside, one could hear the émigré architects talking fascinatingly about their work, in the rhythms of their old-fashioned Estonian.
Jarmo Kauge / exhibition curator

BECAUSE THERE WERE MANY architecture photographs at the exhibition – Kaido Haagen travelled to Toronto specially to take them – we hit on the idea of a dim room where the pictures would be well-lighted. The price of light boxes would have been astronomical, so we started thinking about back-lighted fabric instead. In the middle of the room was a 3D geometric object left from the last exhibition, Paco Ulman’s “Wasteland”, so we decided to put it to new use and get the viewers to walk around it.

THE ENTIRE TECHNICAL SIDE was resolved by trial and error, and I also made some 3D models. We knew that an endlessly long row could be printed on a fabric – but how to hang it up? We printed a six-metre-long test piece and found the most convenient solution – pipes were inserted into tunnels along the edges of the textile, and thin, barely perceptible cables were pulled up and fastened to beams.
In the end, a total of 75 metres of fabric was installed in zig-zagging fashion around the geometric solid. A light was located behind every three-metre segment. The idea worked well; the result was bright, sprightly. Delicate and light, airy construction.

THE EXHIBITION TOPIC was exciting for me. The work of the architects who emigrated to Canada are world-class, not dated in any way. The exhibition’s strong ribbon motif was well-justified as a reference to chronological progression, a journey.

The dark geometric solid made the room smaller and gave it a sense of structure. It seemed logical to screen the films related to the exhibition inside of the structure.