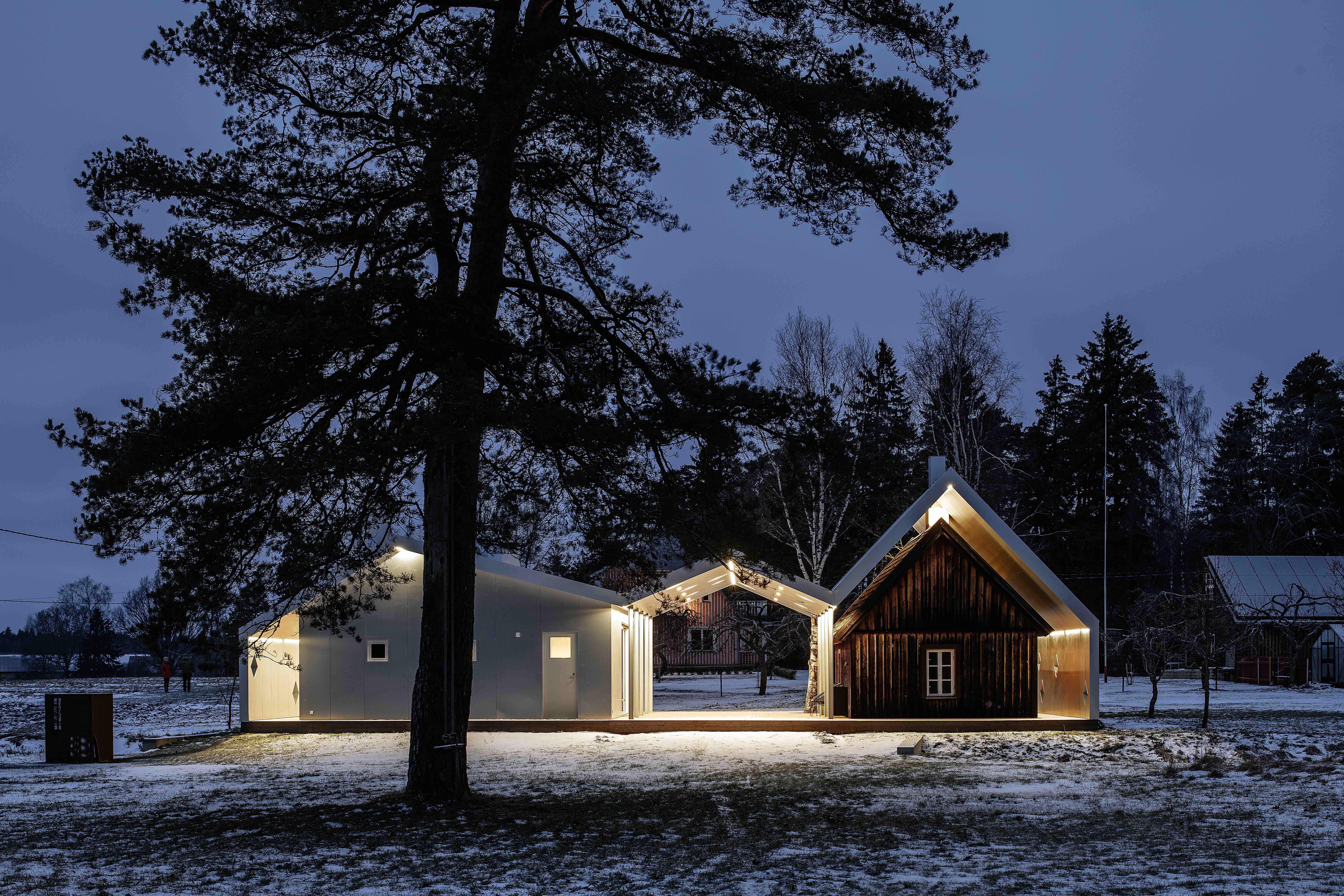 Estonian Association of Architects / award for a private house 2019 winner 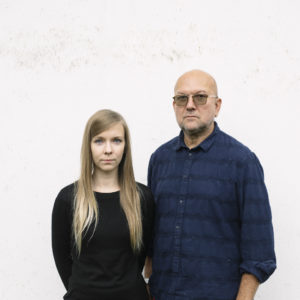 Nominee for the Association of Interior Architects' Annual Award 2018

There should be more contemporary and tailor-made architecture in the countryside. Various sheds and outbuildings are growing like mushrooms after rain in farmyards. In the new Lusthoone sauna building, I love the fact that the old and new volumes were combined into one form and space, and the result with its sharp roof line and rolled sheet metal fits perfectly the overall architecture of the farmstead.
Priidu Pärna, owner 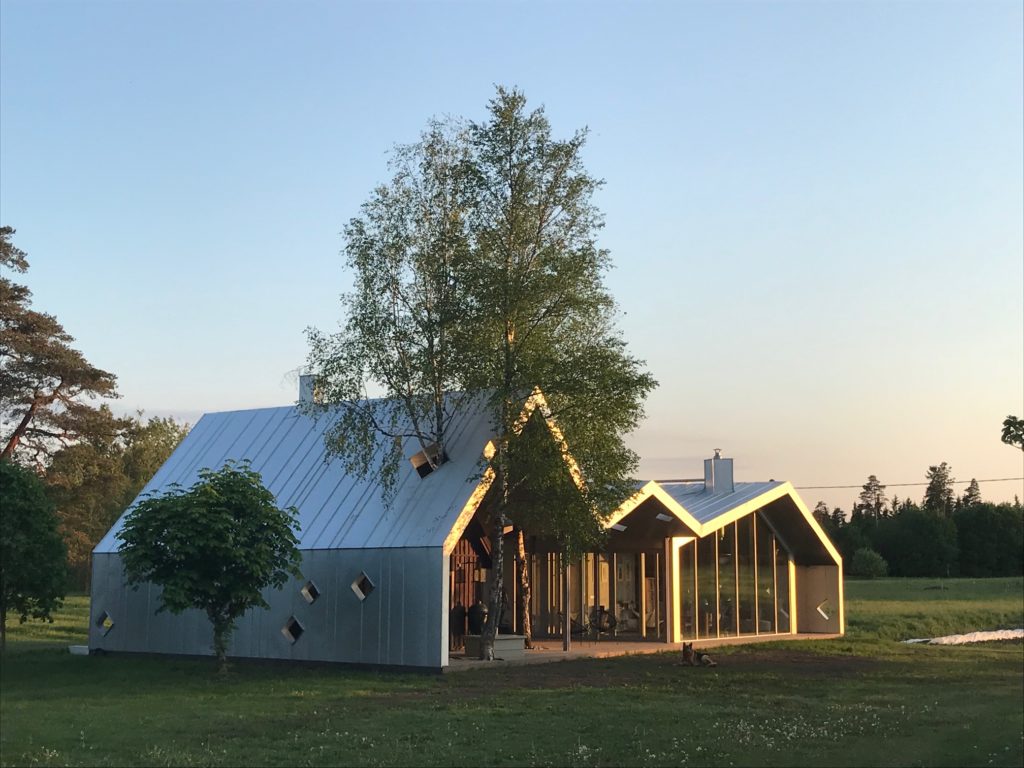 THE FIRST TIME I visited Lusthoone Farm, the old (converted) smoke sauna seemed like a lone little hut off in a field. The owners wanted it to have a partner. They didn’t want a separate new structure that might leave the old-fashioned building even more forlorn, and thus they developed the idea to build an addition and a superstructure, packaging both saunas in the same shell.

I WAS INSPIRED by the Lusthoone’s interwar era farmhouse, which with its rolled sheet metal and ribbed look was a compelling player. Since I myself am an avid sauna-goer, I was able to suggest impressions of places I have been to. The empty atrium area between the two saunas integrates the buildings, landscape and even the sky into a whole. Most people go to the sauna in the evenings and the starry sky overhead or a beautiful sunset are part of the charm of the experience. The walls and the roof over the terrace have diamond-shaped openings through which one can gaze up at the universe. 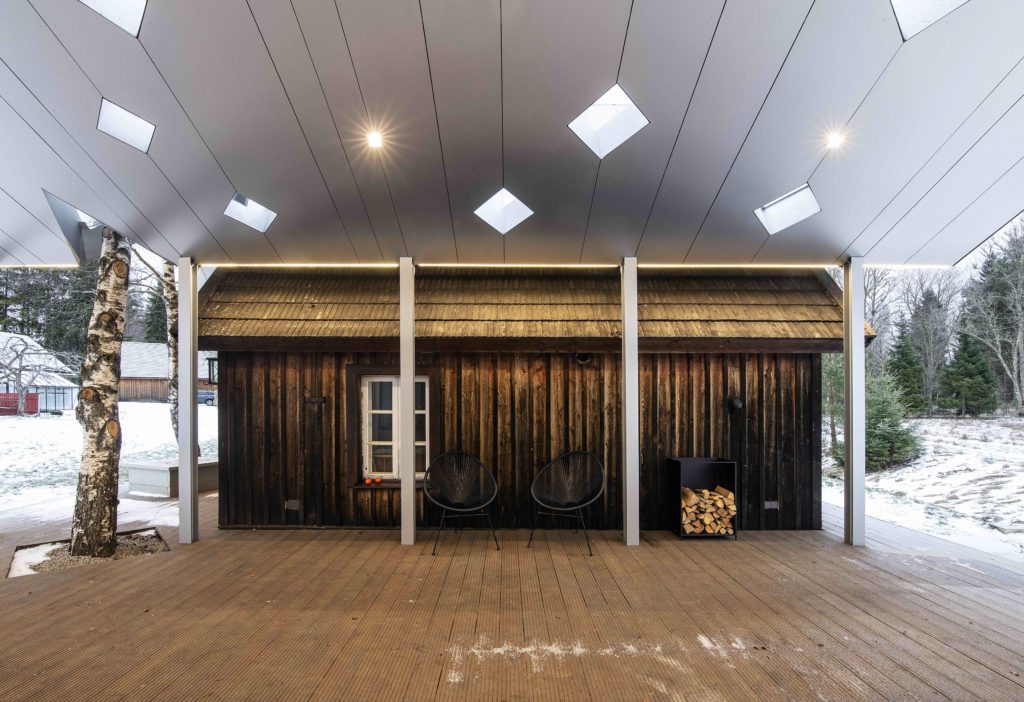 THE INTERIORS follow from an Estonian tradition – it has the Finnish style sauna platform area where you throw water on the rocks, and washing, dressing and sitting areas. There’s also a WC and a kitchenette, because the main house is a distance away. And of course, a terrace. Everything had to fit into the overall dimensions agreed on in the beginning… later it felt that here and there it could’ve been more spacious.

The cave-like steam room, with only one small window, is dark like a primeval smoke sauna. Exiting from this side, you find yourself in a private landscape, a tranquil place to cool off. The counterweight is a fireplace room with glass walls, a cheerful place to relax, with a view of the main house.

Because metal is not usually used in a sauna room as it is here, a little bit of intrigue has been added in. No doubt it required some courage from the homeowners to go ahead with this design. 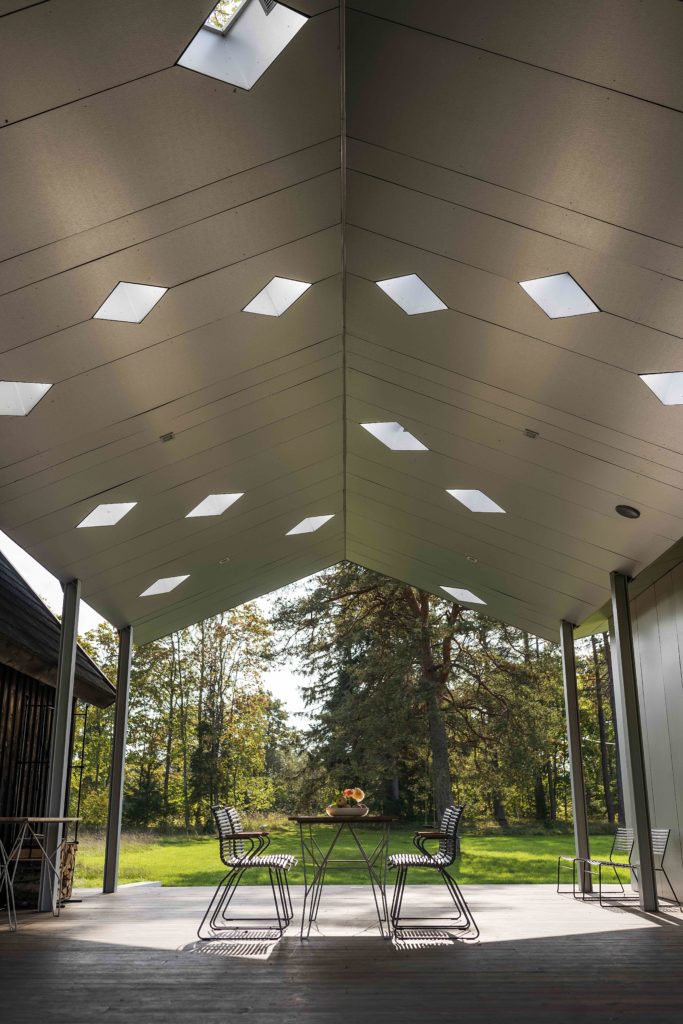 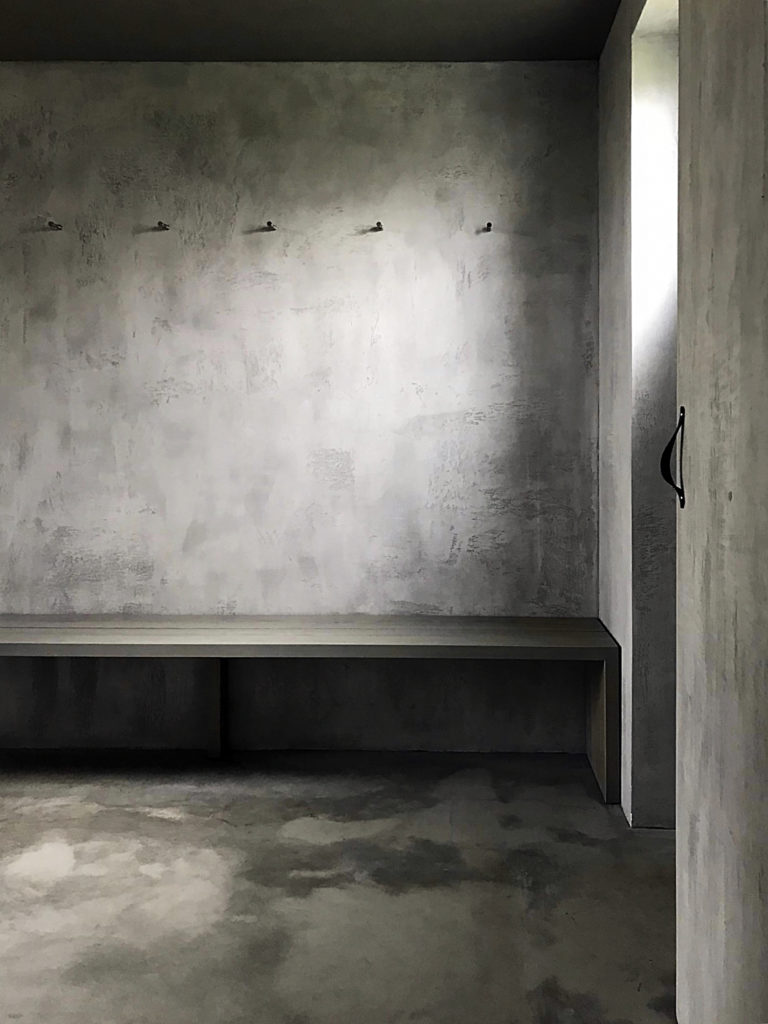 THE MOST COMPLICATED part however was the drainage ditch that ran alongside the structure, as it was part of a special conservation zone from Soviet times. Debating with the Environmental Board took time, but a building permit was finally obtained. Unfortunately, the budget forecast was exceeded by several times and some materials were replaced – there is now alu-zinc instead of aluminium and the glass wall frames of the window are wider than originally planned. The materials behaved differently than the builder intended, and thus we had to look for a compound with the right properties to give the interior a finishing that imitated that of concrete.

It was certainly a challenge for the builder to leave openings in the roof for the birch trees and vigilance was necessary so the trees would not be damaged. I think those birch trees are a very important additional detail.

WHAT I LIKE MOST IS THE PLEASANT ATMOSPHERE THAT TOOK SHAPE HERE. A beautiful old-fashioned form in a framework of modern materials, with a taut interplay of rhythm. The nature of the building is also accentuated by the lighting – reflections, luminance. Glowing in the dark, the sauna seems a bit like an extraterrestrial that has landed on farmland. 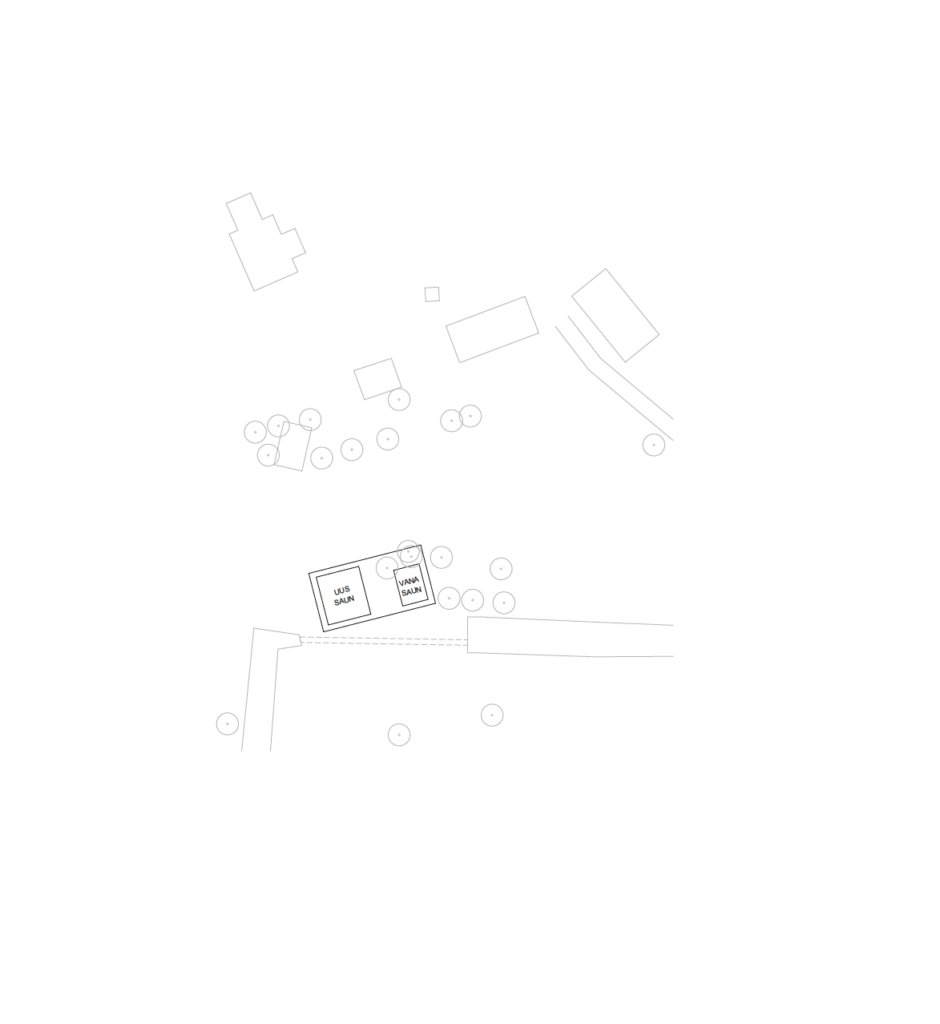 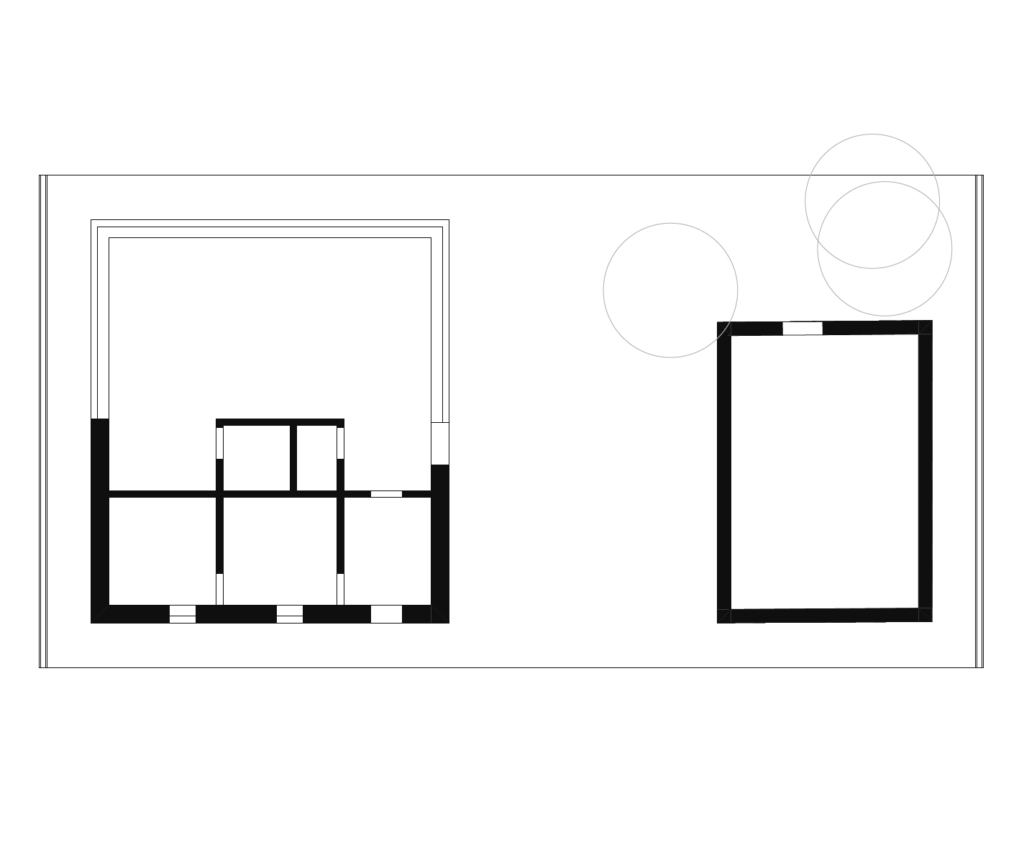